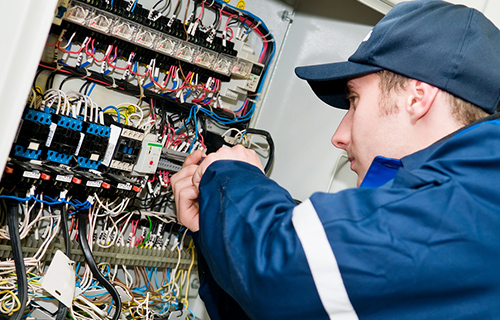 Carlos is an independently employed electrician. He loves his lifestyle business and has never been interested in “growing the company” or working with other people. He doesn’t like the stress of having to depend on anyone else to do the quality of work that he does.

Carlos is proud to be organized and good with technology. These skills contribute to his success. He has an online calendar that customers can use to set up appointments. When there is a problem, he’s fast to fix it, using a tablet to schedule and reschedule appointments on the fly. Occasionally there’s a glitch in his system, but things usually work out just fine.

When Carlos’s wife was hospitalized after an automobile accident, he knew things would have to change if he was going to spend time with his wife in the hospital. In order to keep his business afloat, he brought in a second electrician and decided to hire an answering service to take messages from clients and call his contractor whenever he was unavailable.

Finding a call center wasn’t easy. Carlos was leery. He didn’t have the time to train anyone. He didn’t want to work with nameless operators that would hurt his reputation for exceptional customer service. He especially didn’t want to pay for services he didn’t need.

But when Carlos met with CallCenterUSA, he was pleasantly surprised to discover that their ability to scale to their clients’ needs meant that they were very affordable. Within a few minutes, Carlos’s fear about phone calls being answered by nameless, faceless message takers was put to rest. CallCenterUSA’s operators weren’t poorly paid outsourced or offshored contract workers. They were employees who were surrounded by great managers with long track records within the industry and the company. One of those managers was assigned to his job, and the workers assigned to his company were briefed on his situation and understood his core values and expectations.

CallCenterUSA set up an online communication system with Carlos. Because Carlos could call in with special instructions, the CallCenterUSA team always knew what he wanted them to do. When he was on a job, they could take calls and make schedule changes for him. When he was at the hospital, they could arrange for the contractor to the take the job and then contact Carlos with the details. Carlos felt like he had a personal secretary! Due to the fact that Carlos was only paying for the services he needed, he didn’t feel like he was paying for one.

Getting Through the Rough Spots

Carols credits CallCenterUSA for getting his business through a real rough spot. He had the opportunity to spend quality time with his wife at the hospital, and because the operators that were assigned to his company were assigned long term, he was able to trust them. If he was out of the office and ever had a question about how the day’s business was going or wanted to check in on the contractor’s schedule, all he had to do was call. When a customer’s schedule changed, CallCenterUSA received the call and notified the contractor immediately, so Carlos was never paying his contractor to waste time traveling to empty houses.

Carlos appreciated CallCenterUSA so much that he kept the service, even after his wife was released from the hospital. In the past, Carlos shrugged off changing schedules and customers that missed their appointments as small annoyances that were part of doing business. But when CallCenterUSA was there to help with the scheduling, those small annoyances rarely happened. Carols realized that those 10 minute time periods that he was spending dealing with a cancellation really added up. Now he finds himself getting home from work sooner. And when Carlos is onsite and needs to place a supply call, he doesn’t have to worry. CallCenterUSA places calls for him promptly and can even place follow up calls with supply companies if they don’t return his calls quickly enough.

Most importantly, Carlos discovered that CallCenterUSA isn’t just there for customer calls, it’s there for him too. His wife is still struggling. If she needs him in an emergency, he always is informed, no matter where he is or what he’s working on. If he has to leave work unexpectedly, CallCenterUSA calls his backup support provider so he can head home quickly.

Carlos thought he could handle everything all on his own. When he reluctantly had to change his ways, CallCenterUSA made that change easy. Now that he knows he’s found a company he can trust, he plans to stick with CallCenterUSA for the long run.

Emergencies happen, but they don’t need to slow you down. CallCenterUSA can help without getting in your way. Call us today at 888.654.8500 to find out more.