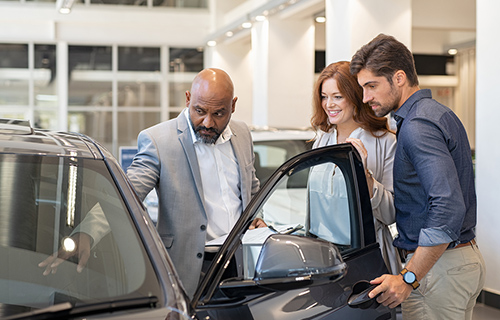 Ellison’s Auto Group had always been successful, even without an Internet Sales division. After hearing time and time again that most of their customers started their searches on the Internet, Ellison’s owners decided that it would be beneficial to have a stronger Internet presence.

They hired a company to oversee their Internet marketing, and before long, the dealership began receiving more leads than it had ever received before.

Unfortunately, the company wasn’t set up to handle so much traffic. When salespeople were out on the lot, the phone would ring for long periods of time without being answered by anyone, and when they were inside, they were losing the qualified calls generated by their foot traffic because they were so busy screening the new Internet calls, many of them from prospects who weren’t really ready to buy. Prospects were also emailing requests for information, but no one ever seemed to be able to get to those at all.

Ellison’s was in a quandary. Should they stop their new Internet sales activity? They didn’t want to hire new employees to pick up the extra calls, especially since they didn’t know whether or not the Internet traffic was ultimately going to be valuable to the dealership’s bottom line.

Ellison’s marketing consultant suggested that Ellison’s contract CallCenterUSA. He said that CallCenterUSA could respond to and prescreen the Internet inquires. Ellison’s general manager was surprised to find out that a call center could do that, but the price was right and she decided to give it a try.

The staff at CallCenterUSA immediately put Ellison’s GM at ease.   All of CallCenterUSA’s managers had worked for the company for at least 15 years. The operators received high-quality benefits and incentives and seemed to actually enjoy solving problems. The combination of all of these factors allowed CallCenterUSA to hire and retain employees that had the interest and ability to take on higher-level tasks.

Together with CallCenterUSA, Ellison’s put a plan together. Not only would CallCenterUSA monitor the Internet inquires, but they would also take care of the overflow calls during the daytime and answer after-hours calls. This really excited Ellison’s. With CallCenterUSA available to do so much of the phone work, Ellison’s felt like they were able to add on to their team without incurring the expense of new staff salaries.

CallCenterUSA has become more important to Ellison’s than the dealership ever imagined they could. The Internet monitoring is a godsend. Now when consumers find the dealership over the Internet, they receive immediate assistance. CallCenterUSA prequalifies the lead and assigns the inquiry to a representative immediately, twenty-four hours a day. This makes it much easier for Ellison’s salespeople to capture the lead and make the sale.

In addition, because CallCenterUSA has taken over daytime reception, Ellison’s salespeople are no longer answering phones when they could be on the showroom floor. They are able to focus on selling and speaking with clients who have already shown a real interest in purchasing a car.

Ellison’s also discovered benefits they never imagined would exist. Prior to hiring CallCenterUSA, the sales staff was responsible for answering the phones. That meant that calls were not always handled fairly. If a customer had previously spoken with one salesperson, it was very easy for another salesperson to jump in and take the job. Now that impartial operators at CallCenterUSA answer the phones, the inquiry is delivered to the correct member of the sales team through text or email. General Internet inquiries are directed to the team member most equipped to handle the calls, not to the next employee who picks up the phone.

Because CallCenterUSA has a record of every call the company has answered, the dealership has discovered that they are able to track trends easily. They now know what time the calls come in, where the calls come from, and are able to see how many calls culminate in sales. They use these statistics to staff correctly.

Ellison’s now considers CallCenterUSA more than an important part of their team; they have become a profit center, just as integral to the business as the sales staff or the mechanics are. Sales have gone up, and Ellison’s connects this directly to the prospects’ ability to get to a human quickly. Ellison’s doesn’t have to worry about CallCenterUSA’s employees’ vacation or sick days. In short, CallCenterUSA provides a very valuable service that contributes directly to Ellison’s bottom line at a very low cost.

Ellison no longer worries about generating too much Internet traffic or not being able to handle phone inquiries. CallCenterUSA distributes the calls fairly to the salespeople, and because the salespeople spend less time at the top of the sales funnel, they are able to make more sales and bring in more commission. Everyone is happy, and the management at Ellison’s hopes to continue using CallCenterUSA for a long time to come.